Quasar Conf 2020: all the latest news

The first international conference by Quasar, the Vue-based framework of which Dreamonkey is a technical sponsor.

The first official Quasar conference took place on 5th July 2020. Dreamonkey was involved and I in particular gave a talk. We’d like to tell you about how we got this far, what it means for the community, what the next steps could be and what advantages companies can gain.

Since October of 2019 Dreamonkey has been Platinum technical sponsor of Quasar, a framework that allows you to create cross-platform applications (web, desktop, mobile and browser extensions) starting from a single codebase. This means a significant reduction in development times without impairing quality and performance of the code.

Quasar has already helped many single developers and small/medium sized software houses to streamline cross-platform software creation. The software manages integration with the most commonly used technologies and promotes best practices, allowing more time for the creative part of development. Dreamonkey helps to make Quasar the most interesting framework also for the Enterprise sector, meeting company needs. Over the last few months we have further optimised the implementation of the technologies needed in the Enterprise area with substantial code improvements, focusing on the integration of TypeScript, Jest and Cypress. Thanks also to our passion, dedication and professionalism, a few months ago we also officially became part of the Quasar Core Team.

We are proud of this result and indeed we believe that this framework is the next big technological boost that can take web development to the next level and simplify the work of thousands of developers.

Quasar reached version 1.0 in mid 2019 and already at the start of 2020 the participation of the members of the Core Team in related conferences was under discussion. This was to promote growth and spread the word to encourage the transformation of the platform into a mainstream product.

We started to push for groups of independent Quasar developers to organise meetings on a local level and test the water for a venue for a first official public meeting, knowing full well that such an event would require considerable organisational effort. Then COVID-19 came along.

Tech conferences have taken a hard hit from the ongoing pandemic, forcing them to re-invent themselves. We saw an opportunity in this trend and in May we decided that Quasar would have its first conference online. Within a month we had prepared the communication, decided the main talks (held by members of the Core Team) found the guest speakers and run the required technical tests. Despite the initial doubts, the conference attracted a lot of interest and was an opportunity for a productive exchange on the coming future of the framework.

Four members of the Core Team participated in the conference:

Four guest speakers rounded off the group to enrich the list of talks. They were:

The conference had a peak of over 300 participants. As well as those who followed us live, we had 2200 views in the first 12 hours, reaching more than 5000 in the first week: a real success for the Quasar Team! 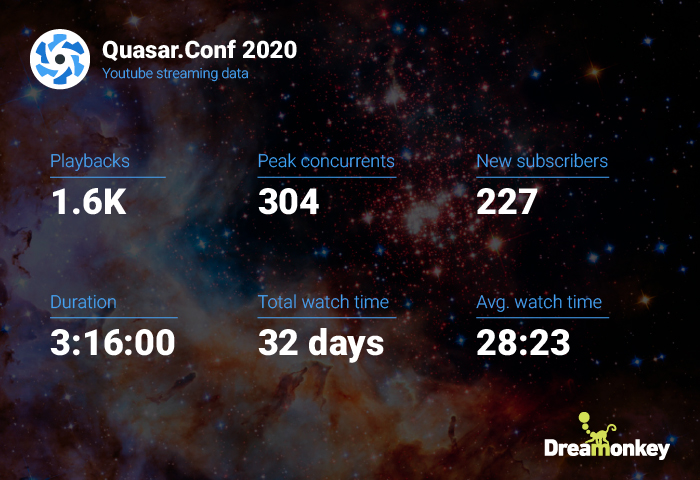 If you have watched the conference, you will have surely noticed an important absence: Razvan Stoenescu, the creator and lead developer of Quasar. Unfortunately he got sick the week before the conference (not from COVID-19) and was not able to introduce it.

If on the one hand, this change of plan denied us the opportunity to hear his important point of view, on the other hand it proved that Quasar is not a one-man show, but a team effort of great professionals. Indeed the organisation of the group allowed us to proceed autonomously thanks to the fallback plans made.

This conference was a “first time” under many aspects and an important milestone for the life of the project. We are confident that from now on we will see more talks by Quasar Team members in related conferences and local meetings. The goal of the Core Team is to repeat the experience in 2021 and possibly plan regular events. You can follow our social media accounts (Twitter, Facebook) to stay up to date with the coming developments.

If you are already familiar with the advantages of Quasar, please consider the time it allows you to save and help us in the development and maintenance of the project by donating a part of these savings. Furthermore, as a company you can choose to sponsor the development of new functions that can benefit you and the whole community. Contact us at Dreamonkey (or another member of the Core Team on our Discord server) to explain your needs to us and build the new release together.

If, instead, you just want to know more and are evaluating the framework that is most suited to your company, contact us to decide if Quasar is right for you.